The story behind the Vodafone Warriors Heritage jersey 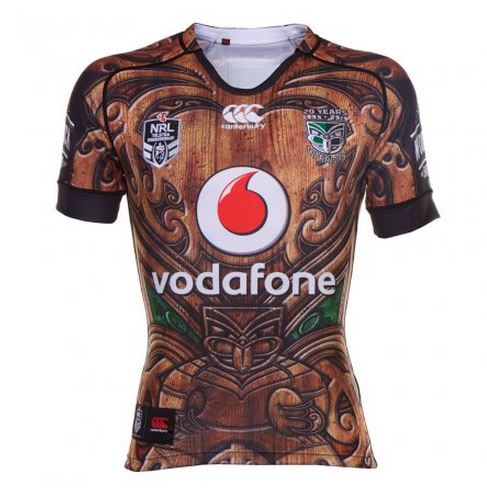 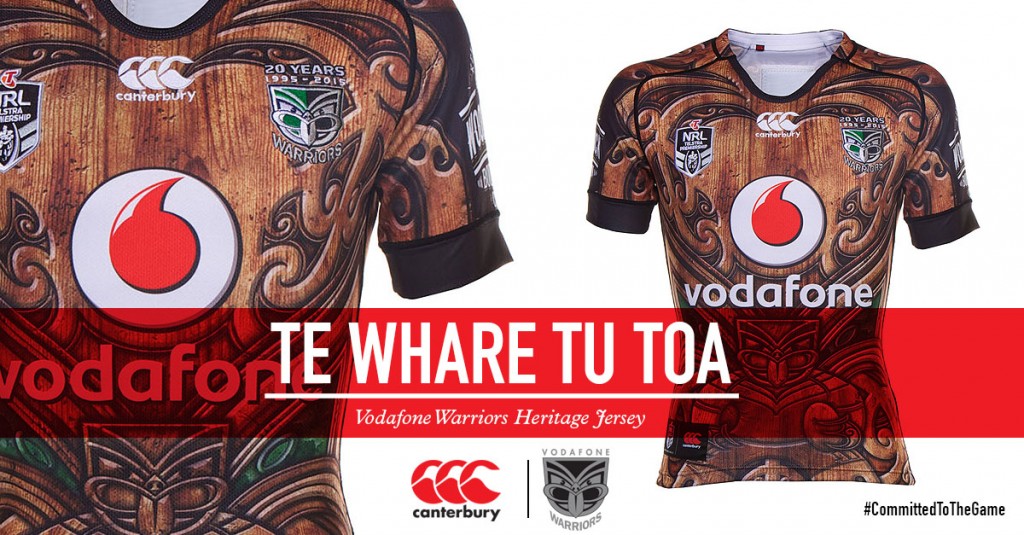 The Te Whare Tu Toa jersey boasts a unique design that is based on whakairo, traditional Maori carving that embodies the histories of tribes and families, with each pattern and symbol, enhancing the story in its own way. They are often found in homes and meeting houses and, like its wooden counterparts, the ‘carving’ on the Vodafone Warriors’ jersey tells the story of the side from its beginnings and depicts its future. Symbolically, when a player puts on the jersey, he is entering the Vodafone Warriors’ house and is the link between the past and the future; he wears the history and traditions of the club when he takes the field.

The jersey strongly features the Vodafone Warriors club logo, a tekoteko (designed by Francis Allan) or carved human form with the protruding tongue signifying defiance. Looking at the front of the jersey, you’ll see a tekoteko carrying a rugby ball across the abdomen, which represents the future. A second logo behind the first breathes life into it and depicts the club’s respect for all relatives of the players, administration and all its loyal supporters, acknowledging their importance to the club. 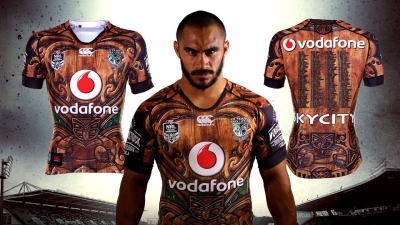 At the small of the back is another tekoteko that represents the first Vodafone Warriors side to take the field in the NRL. You’ll notice that the tongue is curved. This is because when the logo was first designed, the then CEO Ian Robson and Marketing Manager Liz Dawson altered the original straight tongue to a curved tongue, not realising that it signified femininity and lack of courage, hardly the traits displayed by the Vodafone Warriors on the field.

The centre of the back features a roll of all the players that have represented the club at first grade level over the years. It represents a veritable who’s who of rugby league with the names of some of the game’s greatest players over the past two decades: Stacey Jones, Andy Platt, Dean Bell, Simon Mannering and Matthew Ridge to name just a few of the stars appearing in the list.

But there is so much more symbolism in the jersey. The swirling koru loops (based on unfolding silver fern fronds) represent growth, strength and peace, as well as free-flowing movement, the style of rugby that the Vodafone Warriors endeavour to play. The mangopare, or hammerhead shark, also features strongly. For Maori, the shark depicts strength, tenacity, determination and refusal to back down, the qualities expected of every player that wears a Vodafone Warriors’ jersey

Taken as a whole, the jersey not only represents the history of the Vodafone Warriors, but also the great heritage of New Zealand. To wear it as a Vodafone Warriors player is to honour the past and have an important role in carrying the club’s proud tradition forward.

The Role of Motivation in Footy

Motivation is the foundation upon which all athletic effort and accomplishments are built. Without a desire and determination to compete ...

After what was a difficult and largely unlucky season for the Vodafone Warriors with injuries to arguably their best players ...